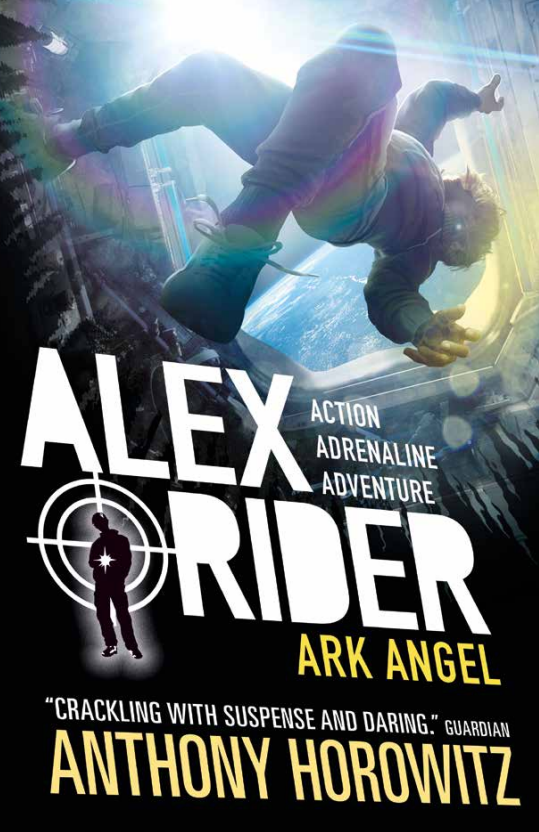 The man from Whitehall didn’t know he was being followed. His name was Davenport and he worked as a civil servant in the Ministry of Defence.

He was carrying a black, leather briefcase which bumped against the side of his leg as he walked. He had no idea that there had been someone behind him from the moment he had left his office, but then he wasn’t a very observant man. Nor did he realize that he had less than ten minutes to live. Just after half past two, he entered Leicester Square tube station, on his way to North London. The man who was following him passed through the ticket barrier and stood six steps behind him as they took the escalator down towards the platforms.

He was wearing orange tinted glasses and fingered a large, gold signet ring on his third finger. Neither of the two men noticed the 14 year old boy standing on the other side, traveling up.

It was a one in a million chance.

The boy’s name was Alex Rider and he was on his way to the cinema, meeting a couple of friends. Anyone glancing at him would have thought he was an ordinary teenager, slim and fair haired, wearing jeans and a baggy jersey.

They would have laughed at the suggestion that he had been sucked, unwillingly, into a world of spies and terrorists and that he had worked for MI6 Special Operations as a unique and highly secret weapon no fewer than four times.

At the end of one mission, he had been wounded and had found himself in a private room at St Dominic’s Hospital in North London. But even as he had recovered, he had tangled with four kidnappers who had broken in during the night. It had been the start of an adventure that had led him to Ark Angel, the extraordinary space station orbiting the earth.

He had never learned the men’s names but he had called one Spectacles after the tinted glasses that he wore.

Alex recognized Spectacles now as the two of them passed. For a moment, he was tempted to do nothing. What business was it of his? He never searched for trouble but at the same time he couldn’t just let it pass him by. Spectacles was the worst sort of killer, a man who would do anything if the price was right. And he was here, in London. He couldn’t just let him sink out of sight.

Alex was almost at the top, at ground level, but he made a sudden decision, threw himself over the handrail and – ignoring the cries of the other passengers – began to slide back down the central reservation, lying on his back with his knees bent, the polished wooden surface offering no resistance. The escalator was steep and within seconds he was rushing past the commuters, hurtling back down towards platform level.

There was a barrier in the way, presumably to stop people doing exactly this. Alex twisted sideways moments before he crashed into it, rolling over the opposite handrail and dropping on to the down escalator a few steps before it reached the end. Someone shouted at him. A hand reached out to grab him. Shaking it off, he ran forward.

The two men had already reached the eastern platform of the Piccadilly line. As Alex continued forward, Spectacles caught up with Davenport and reached out with one hand as if to tap him on the shoulder. At the same time, he pressed a tiny switch on his signet ring. A cloud of poison gas hissed out underneath Davenport’s face and the civil servant collapsed, dead so fast that he didn’t even know it. At the same moment, Spectacles grabbed the briefcase and turned to move away. That was when he found Alex standing in front of him.

His eyes widened in shock. He recognized Alex instantly but he didn’t let it slow his reactions. Still holding the briefcase, his hand lunged for the gun in the spring loaded holster clipped over his belt. The gimmicked ring he had used on Davenport was empty. Behind him, the body lay sprawled across the platform. A few commuters were moving towards it.

Alex had seen everything. A murder on the Underground, but one that was so fast that it had been invisible. And now it was his turn. He was already in combat stance as the gun, a Glock automatic, came out.

Alex had learned karate from the age of six. His uncle, Ian Rider, had insisted that he take lessons. It was just one of the ways that he had been prepared for the life that was waiting for him, even though he hadn’t known it at the time. He swept the weapon aside with a simple downward block then followed through with an explosive front kick – mae-geri as it had been called by his instructor. Although he was only wearing trainers, his foot slammed into Spectacles stomach with full force.

The man was thrown backwards and off the platform, just as a tube heading for Heathrow roared out of the tunnel.

There weren’t many people on the platform but a woman had seen what had happened and screamed as the man hung briefly in the air, the electric rails beneath him, the tube train bearing down on him, the horrified driver staring out of the window. In fact, Spectacles was lucky. He dropped in front of the advancing train, missing it by inches. Nor was he electrocuted. He landed in the crawl space beneath the rails and was still there, trapped, when police and the security services arrived to drag him out.

The station was evacuated. Davenport’s body was taken away on a stretcher and that night on the news it would be announced that a senior civil servant had sadly died of a heart attack.

Alex was never told what the briefcase contained or who had paid Spectacles to steal it. But then, there are some secrets that must be kept at any cost and the existence of a 14 year old spy was certainly one of them. Alex himself was allowed to slip quietly away.

Unfortunately, he had missed his film.