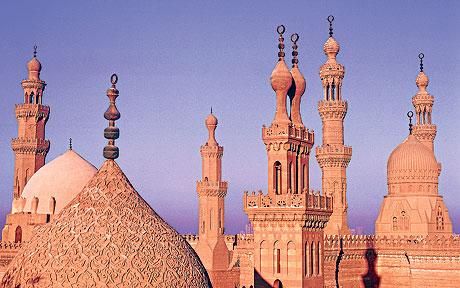 In his latest novel, Scorpia Rising, Anthony Horowitz is sending his teenage spy, Alex Rider, to Cairo and the desert. So he had to go himself...

I have never been too sure about holidays. What are they for and are they really worth the cost, the disruption, the indignity of modern air travel and the very short-term benefits of souvenirs and a sun tan? However, 10 years ago I invented a teenaged spy, Alex Rider, and for purposes of research I have been forced to follow him around the world: to America, Cuba, Thailand, Australia, the Caribbean and the French Alps.

And that, of course, does make a very good excuse to travel, although it has occasionally led me to some rather offbeat places.

For Alex's ninth adventure, due out next year, I found myself in Egypt, a country well suited to teenage adventures.

It is in some ways Middle East lite – which is to say it has the oil, the heat, the religion and the culture, but somehow seems closer to the West, more approachable than many of its neighbours.

The severe treatment meted out to anyone demonstrating against Hosni Mubarak's government, increasingly conservative attitudes to women and the fact that 40 per cent of the population subsist on less than £1.40 a day somehow seem to matter less when you've got the Pyramids. And Egypt's ancient history grips our imagination in a way that its modern history can't. Look at the success of film franchises such as The Mummy. They're lucky the pharaohs were so cruel.

Egypt does make a compelling holiday destination. When it's cold and wet in London, you can guarantee the sun will be blazing there – and you're only five hours away with no jet lag to worry about, either. There's diving at the Red Sea, cruises on the Nile, adventures in the Sahara and tombs and temples just about everywhere. What more could you possibly want?

Well, my needs were actually more limited. In the book, Scorpia Rising, Alex spends a few weeks in Cairo (at an international school) before being kidnapped and taken to the desert – an abandoned French fort near the oasis town of Siwa. And so those were my two locations. By and large, Alex does not do mosques or museums. Also, as a rule, he tends to steer clear of the major tourist sites for the main set pieces, trying to avoid the fate of some of the later Bond films, which became hopelessly corny as the action was twisted to embrace such obvious landmarks as the Eiffel Tower, Luxor, the Guggenheim in Bilbao and the Millennium Dome.

Unfortunately, Cairo is not a very attractive proposition. In fact, let's be honest, it's grindingly ugly. The pollution is bad. The traffic is worse.

The heat (41C/106F degrees when I was there in May) is stifling. What maniac allowed them to build the Grand Hyatt Hotel in such a prominent position on the Nile and then hired an architect who had clearly trained at the Heathrow Airport School of Architecture back in the Sixties? And I can't look at the rotting pink carapace of the Sofitel on the opposite bank without imagining it collapsing in a cloud of well-deserved demolition dust. A great river deserves better than this.

How do you describe this huge, densely populated city? While I was having a mint tea in the bustling Fishawi coffee house, right in the middle of the souk, a trader came up to my table and offered me a fake Rolex watch. I told him I wasn't interested. He offered me another, then another. I told him I didn't want a watch. In the nicest possible way, I tried to explain that his watches were cheap and horrible, that they probably wouldn't work and that anyway I had one. "OK," he said. "I lower the price." That's how Cairo is.

It's blind to reason. It's in your face. It won't leave you alone.

And yet, it is a city that does reward exploration. After an hour in the souk (where I managed to buy jewellery at half the offered price and only three or four times more than it was probably worth), I wandered down to Fatimid Cairo and visited mosques and madrasas – Islamic schools – whose beauty took my breath away. The tomb in the Madrasa of Sultan Barquq is a vaulted chamber of soft grey wood and stone, utterly peaceful, with extraordinary colours from the stained-glass windows dappling the very air.

So why did I have to bribe a guard to unlock the door and let me in? What is it with these people?

But I think I do vaguely get the idea. You have to look for the boxes within the boxes. That is, walk through Islamic Cairo, Coptic Cairo, Fatimid Cairo – it's just modern Cairo you've got to avoid. The souk at Khan al-Khalili is undoubtedly fun (and a great place for a chase with Alex using the various souvenirs – stone pyramids, spices, copper plates – as weapons), but the streets around the Wikala of al-Ghouri, an ancient hostel, are quieter and just as interesting. Above all, you need the noise and the heat to appreciate the interiors: their soaring pillars, the mosaics, the ornate wood panelling, the sense of calm and stillness. They reflect each other, and it's just a question of negotiating your way between the two.

I did visit the Pyramids at Giza in the end – but even there you have to play the same game. I went very early in the morning and managed to slip in before they had actually opened. For about half an hour I was completely on my own and wandered around in a daze. The whole site really is awesome and whispered something of the power of civilisation, the ambition of those ancient dynasties. But an hour later, a thousand coaches and taxis had arrived, turning the place into a glittering car park and rather defeating the point. Modern Cairo again. I was glad to be gone.

Alex is knocked out, bundled into a car and driven from Cairo to Siwa Oasis. I took the plane. Even so, it was a fairly gruelling journey. Less than an hour in the air to Alexandria, but then a six-hour car journey across the desert, mainly through the night. The road was modern, dead straight and actually pretty dead with emptiness on both sides – so that even when the sun came up there was nothing to see, and I did begin to wonder if the effort was going to be worth it.

Siwa is the most remote of the Egyptian oases, and although it is well into the Sahara Desert, it has more water that it can actually cope with. There are huge lakes so full of salt that strange, crystal formations stretch themselves over the shorelines. You can swim in the lakes, but because of all the salt you can more or less sit on them, too. The town of Siwa itself is small and sun-baked, spread out beneath the ruined Berber city of Shali, which gives the appearance of having partly dissolved – which is actually exactly what it did, in 1926, after three days of heavy rain. There are as many donkey carts as cars or buses. Apart from a scattering of internet cafés, life here pretty much ignores the modern world.

I had come here to get a real sense of the desert. Well, I did indeed see stars with no light pollution and the strange blue glow in the sky after the sun had set. I watched the endlessly shifting sand dunes, swam in a thermal pool and glimpsed a white desert fox with Yoda ears and startled eyes, somehow surviving in this arid wilderness. All in all, I was partially successful. Being driven at high speed in a four-by-four over vertiginous sand dunes is an exhilarating experience – not for nothing is this area known as the Great Sand Sea. I loved being served bright red hibiscus tea as the sun set, my driver having built a tiny bonfire in the sand. But was it perhaps too comfortable, handed too easily on a plate? I felt, like Alex, I should have suffered more.

He certainly won't stay – as I did – at the Adrère Amellal, one of the great, eccentric hotels of the world. The name means "white mountain" in the Berber language, and it's built against a massive outcrop with twisting passageways leading to rooms that are actually more like grottoes, dug out of the stone.

The whole place could have been built by a child on a beach with a bucket and spade, perhaps influenced by Gaudí. There are no straight lines, no right angles. Nothing is regular. It has been designed to be part of the landscape, and everything about it is discreet. Even the large, freshwater swimming pool is supplied by an underground well (with a stone spiral staircase leading down into the depths). It has no electricity. When you return at night, oil lamps lead the way to your room. And all the food is grown or reared locally. Meals were delicious and, in caves filled with candles, intensely romantic. Abundant alcohol and all excursions were included in the price.

That price was high – even higher, in fact, than at the five-star Four Seasons, which had provided me with a very swish room overlooking the Nile in Cairo.

The Adrère Amellal was a lot less luxurious, with hard beds, fairly basic plumbing and, obviously, no air conditioning. But then it is not so much a hotel as an experience in itself. It's a place to go with someone you know well – or someone you would like to know a whole lot better.

My trip was put together by Bailey Robinson, a company that packages holidays exactly to your needs. There are probably cheaper ways to visit Egypt, but it provides an exemplary service with all the hassles, from flights to pickups to hotel reservations, taken care of. The only thing it couldn't do for me was work out how Alex Rider escapes from quicksand while surrounded by men with machine guns – but its staff are probably working on that now.

Egypt is on the edge of change. After almost 30 years in power, Hosni Mubarak has been ill and already there is talk of a successor – although nobody is sure who that will be. And which direction will the country take?

Will it become more democratic or will it bow to the more hard-line, Salafi attitudes that are blowing in the wind? Tourism will be part of the equation, although perhaps smaller than one might expect. It is only responsible for around 11 per cent of Egypt's GDP.

All in all, it's a good reason to visit sooner rather than later. Egypt is very safe. The people are welcoming. The country is endlessly fascinating and unthreatening – unless, that is, you're Alex Rider. And even he would probably want to go back.

Anthony Horowitz: My family values
Return to Journalism
The return of Foyle’s War