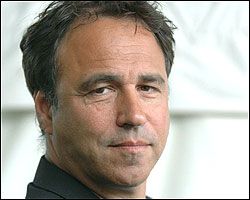 Writer Anthony Horowitz, 52, is known for his television dramas (such as Foyle's War) and children's books (Alex Rider teenage spy series). He lives in Clerkenwell with his wife, Jill Green, and their two children Nicholas, 19, and Cassian, 17. He spoke to Mark Anstead about how he deals with money

How did your childhood experience influence your attitude to money?

My father was a solicitor and a very mysterious man – I had very little knowledge of what he was doing. I can remember at the age of 17 travelling across London on a motorbike carrying half a million pounds in bearer bonds which I had to deliver to someone, but I never found out why. Then he went bankrupt a second time.

He died of cancer when I was 21 and my attitude to money was formed by what happened next.

In the week after his death a series of letters arrived from different banks saying my mother was responsible for debts that ran to millions of pounds. I remember her ageing fast as it all unravelled.

The banks believed my father had stashed his millions away secretly and that she was intending to ride out the storm. The truth was she had no idea where his money was.

Thank goodness my mother had the house. She sold it and bought something smaller and went to work aged 50. To this day, the whole experience has given me a horror of anything to do with investments or shares.

If I've got cash I put it in a building society, which is pathetic I know. I won't do anything else – I just keep my money in different accounts.

Does talking about money embarrass you?

When I'm talking to youngsters in prisons, I am always asked how much money I earn. It's very difficult to answer because I'm old-fashioned and I think it is a private matter.

We now live in a very money-obsessed age. Look at all those rich lists. The lottery is another malign influence because of this idea that somehow winning £10m will make your life better. It won't make your life any longer

But surely you've done well from your books and TV scripts?

If my Alex Rider books were to be adapted into a series of films like Harry Potter I would probably become so rich I would be embarrassed by it, but it looks like there will only be one film.

How do you separate finances with Jill?

We keep things completely separate without a single shared account. We run our household finances very simply – I pay for some things and she pays for other things. We have never argued about anything to do with money because we're very work-obsessed.

We have just had a five-part series commissioned by ITV, so we are spending hours getting scripts written. We make financial decisions very quickly by comparison with anything to do with work. We have just changed from a BMW X3 to a Toyota Prius and that decision was taken in one hour.

Have you learned any lessons about money through mistakes?

I've never really invested so I've never lost anything. When I was 18 I inherited £1,000 from my father and he told me to put it into his company, but just one week later he went bankrupt.

What's the secret of making money?

When I give talks to schools I always say you must make sure you enjoy what you are doing – if you pursue money for its own sake, you are unlikely to be happy.

My new Sony VAIO computer, the very latest and very thinnest of laptops. It's light so it's easy to carry and it's very efficient. My wife has just bought me an iPhone, which I think is fantastic.

I once bought an expensive Montblanc pen for £300. It's a lot of money for a pen, but I've always found it rather scratchy so I wondered why I bothered. A cheaper one does a better job.

How do you prefer to pay – cash, card or cheque?

I like paying with American Express because the card has no limit and they give me air miles. If a retailer won't take that, I use my Barclays Connect debit card. I only have one credit card and I always pay off at the end of the month – I have never failed to do that.

How do you tip?

Tipping is an absolute torment. It's so demeaning and so old-fashioned. When I walk into a hotel and they carry my bags I twitch with worry about whether I'm giving the right amount.

The worst experience I've ever had was in an American restaurant. The lunch bill came to $88 so I routinely rounded it up to $100. I was entertaining an associate, but to my chagrin the waiter came up to the table and said I hadn't given enough. It worked out as 12.5 per cent, but he said I should have left 20pc. It was so embarrassing.

What's been your greatest extravagance?

I do like to travel Premium Economy. Other than that I don't splash out much – even when it came to buying my new laptop I waited until I got good mileage out of the previous one, which lasted five years before it bust. Of course I've got enough money in the bank to buy a laptop and some writers get a new computer for every book they write, but to me £1,200 is a lot of money so I take my time.

How much did your home cost?

We bought our previous home, a six-bedroom Edwardian house in Crouch End, 17 years ago for £300,000 and sold it in 2006 for around £1.5m. We had to pay a little more to buy our current home, a duplex penthouse apartment in Clerkenwell, but I don't want to say exactly how much.

Jill completely renovated our Clerkenwell apartment after we purchased it, but we made a loss because we bought just before property prices came crashing down.

I'm not worried because I've never thought of my home as part of my financial portfolio – I earn money from books and whether my house value goes up or down is irrelevant; I just live there.

Do you bank online?

Yes. About once a month I look at my balance and sometimes I move funds around if I can see I am going to need money in my current account for something. I keep a healthy buffer in the current account and my Barclays Savings Reserve account holds further money where it pays a better rate of interest.

Do you use other high interest accounts?

Yes, because that's my only form of investment. I also have an Abbey National account and when I went into them recently they told me I could get an even higher rate if I moved it to another account, so I did. But I wait for the banks to tell me – that's what they're there for.

Have you ever been in debt?

No, not even as a struggling writer at the start of my career. There are two principles I've always kept to, one is staying out of debt and the other is making sure I have enough to pay my tax bill.

What has been your favourite holiday?

In 2000 we went to South Africa for three weeks as a family and it was a fantastic holiday.

What do you love to spend money on for fun?

We eat out twice a week, not usually very expensive places, and we tend to stay in nice hotels rather than the cheaper places we used when we were younger.

Do you think pensions are a good idea?

I've got pensions, but I've stopped contributing to them. I talk to my accountants each year and when they try to explain to me what I have invested my eyes glaze over after 15 seconds. I'm sure a lot of writers say this but, really, I see my books as my pension.