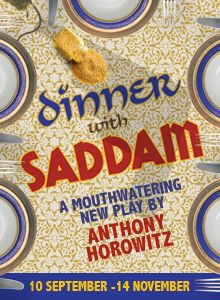 "Saddam, fearful of assassination attempts, was known to move regularly from private home to private home. Even before the war, he declined to spend nights in one of his palaces.” USA Today, 20th April 2003

So what happens when Saddam Hussein turns up on your doorstep and announces he is staying for dinner? Political and personal issues are top of the menu, but behind the kitchen door something else far more sinister is cooking…

Dinner With Saddam opens at the Menier Chocolate Factory on 10th September. Tickets can be found here.

Return to Theatre
A Handbag